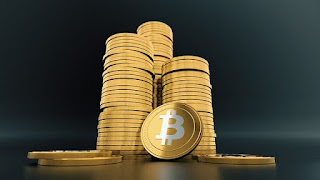 Bitcoin is the best performing asset class of the last decade but it is misunderstood making lots of people susceptible to scams. Find out how people are really making money with bitcoin.

Bitcoin is just over 10 years old now and it has taken the world by storm. It has created many overnight millionaires through its various bull runs, the highest value reached at the end of 2017 when it peaked just under $20,000. Due to its complex nature and high profits, it attracts all sorts of people, some who take advantage of other people’s lack of knowledge. Many people have fallen prey to bitcoin scams and ponzi schemes. Therefore, it is important to know what bitcoin is and how you can actually make money from bitcoin.

Bitcoin is a cryptocurrency and worldwide payment system. It is the first decentralized digital currency, as the system works without a central bank or single administrator. The network is peer-to-peer and transactions take place between users directly, without an intermediary.

Since no single administrator is responsible for the maintenance or backing of Bitcoin, transactions issued in Bitcoin are verified and recorded in a public distributed ledger. This public ledger is called a blockchain.

How does Bitcoin work?

A blockchain, as first outlined by the anonymous author Satoshi Nakamoto, is essentially a public ledger that is distributed and maintained by computers all around the world through the internet.

The blockchain instead is a shared public ledger that the entire Bitcoin network relies on. The Blockchain draws its name from its underlying data structure that consists of 1-megabyte files called ‘Blocks’, which are essentially ledgers themselves. Blocks are ‘Chained’ together through a complex mathematical proof.

Simply put, the blockchain is a form of ledger that – rather than being kept by a bank – is instead shared between Bitcoin ‘miners’ and ‘nodes’ around the world.

All network nodes (computers running Bitcoin software) have the potential to access the Blockchain and view authenticated transactions without barriers that prevent access (such as a bank charging for its services in maintaining a transaction history).

The blockchain instead relies on cryptography (the art of writing or solving codes) as its proof, instead of relying on a third party to authenticate and verify all pending transactions before they take place. The process of authenticating pending transactions and collecting them into a block to include in the Blockchain is called “Mining”. This process is performed by members of the Bitcoin community who are called “Miners”.

Mining draws its name from the metaphor that Miners receive Bitcoin as a reward in a similar fashion to how rare commodities, such as gold, are mined from the ground. Miners are computer users with incredibly powerful hardware that solve complex mathematical problems to cryptographically verify a block of transactions, and then connect them to all previous transactions in the Bitcoin network.

Miners serve the Bitcoin community by securing the network. The process of solving the cryptographic proof for a block is extremely resource intensive. By winning the race to mine 1-megabyte ‘blocks’ of transactions, Miners receive a ‘bounty’ or ‘reward’ in Bitcoin. This is also how new Bitcoins are allocated and enter the system.

A Private Key is an incredibly important ‘signature’ for Bitcoin users, which is used to confirm pending transactions by giving a mathematical proof that they originated from the owner of the wallet in question.

When a user wishes to transact in Bitcoin, their intention is signaled on the Blockchain by submitting a transaction signed with the user’s private key. The Bitcoin network then validates the transaction by checking that the to and from addresses are valid, that the private key is valid, and that it has access to enough funds to perform the transaction. The transaction is usually confirmed on the network within the following ten minutes.

Bitcoin, as a financial system, is designed to self-regulate. A malicious transaction requires so much computation (and thus electricity) that in almost all cases it is more profitable to use that same compute power to secure the network instead and collect the block reward. This is what prevents actors from attacking the network and preserves the Blockchain from recording malicious or fraudulent entries.

Users around the world can either obtain Bitcoin as a reward for mining and securing the network, receive the cryptocurrency as a gift or as tender for services rendered, or can buy Bitcoin from an online currency exchange of their choice.

As with the emergence of any new technology, several misconceptions surround Bitcoin that do not accurately describe how the Bitcoin network (or cryptocurrencies in general) operate.

Despite popular rumour, it is not feasible to ‘hack’ the Bitcoin network and fraudulently create or issue Bitcoins; this would require the ‘consensus’ of every single node around the world to do. Similarly to how one’s physical wallet might be stolen with currency inside, however, Bitcoin Wallets may have various vulnerabilities depending on their issuer and origin and Wallets themselves can be attacked.

Whereas one might rely on a bank to secure the privacy of one’s bank account (a private ledger), all computers on the Bitcoin network have the potential to view the Blockchain and can usually see each Wallet’s balance.

Further, all transactions are further visible on the Bitcoin network. Even though the names of transacting parties are not disclosed on the network when exchanging Bitcoin, sophisticated analysis of the blockchain could allow third parties to trace flows through the network.

The future of money?

Bitcoin offers an amazing alternative to the traditional banking system, relies on immutable mathematical proof for its foundation, and for the first time in human history offers a decentralized currency where trust between two parties can be scaled to the level where a global community has equal access to a global monetary system that is natively digital.

Bitcoin’s success will, in the future, be determined by how many people and markets around the world are prepared to accept it as a de-facto digital currency, and how banks and other regulators around the world might perceive the Bitcoin network as a threat to their sovereignty and very existence.

How to make money with Bitcoin

Buy bitcoin from a cryptocurrency exchange and HODL until a future date when its value has risen significantly. The term HODL came about when a trader misspelled the word hold in a bitcoin forum when he meant to say he will hold his profits instead of selling. HODLing is a form of long term bitcoin investment where you buy now without the intention of selling in the near future and bet on the currencies long term value.

Bitcoin trading is buying and selling on advanced cryptocurrency exchanges using trading charts similar to forex trading to try and forecast price movements caused by external factors in the market such as events such as the bitcoin halving, regulation and industry news. Using techniques such as sentiment, technical and fundamental analysis to help with trading decisions.

Arbitrage trading is when one buys bitcoin for a low price at the cheapest exchange and then sells it at a higher price on another exchange. The arbitrage trader takes advantage of price differences between different exchanges to make a quick low-risk profit.

You can be a solo-miner if you have set up your own bitcoin miner. This is a difficult way to mine as it may take longer to generate blocks depending on your equipment as you need massive hashrates.<hr.

You sign a contract to hire mining equipment in a remote location for a specified amount of time. The mining happens remotely in locations where it is affordable to mine cryptocurrencies. You do not have to deal with buying hardware, setting up, running costs which include electricity costs, heat and noise generated by fans.  By investing you get daily payouts that are based on your investment without actually mining directly.

Cryptocurrency companies payout rewards in bitcoin for people who refer new customers to their businesses. This is very common in cryptocurrency exchanges to have affiliate programs that their customers share via social media to attract other users. E.g you join a bitcoin affiliate program and then create youtube videos about the product with the affiliate link in the description and you get paid for everyone who signs up through your link.

Bitcoin faucets are sites that pay you in Satoshis ( the smallest fraction of a bitcoin, 0.00000001 BTC) to complete simple tasks like watching videos, clicking ads, downloading apps and completing surveys.

Now you know a little more about what bitcoin is and how people are making money using bitcoin.

Email ThisBlogThis!Share to TwitterShare to FacebookShare to Pinterest
Labels: Investing